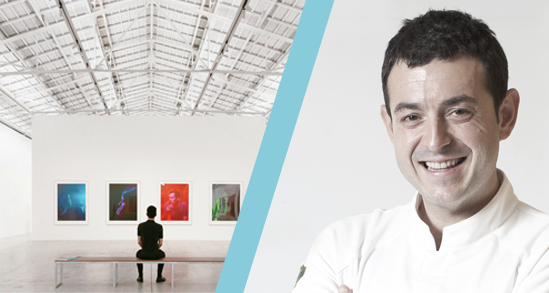 From 24 JANUARY to 2 FEBRUARY

Free entry.
The capacity varies according to the experience.

This new space aims at offering you a wonderful experience related to art and gastronomy. You will be able to listen to Ricard Camarena, visit his restaurant and medieval winery and watch the audio-visual screenings on gastronomy and on the work of the 2-Michelin starred chef.

Hearing Ricard Camarena talk about gastronomy is an experience in itself, but if you have the opportunity to do so in the newly-opened art pavilions Bombas Gens, it is even more special.

Tour of the art exhibitions and the medieval winery.

Bombas Gens Centre d’Art offers you a guided tour of its exhibitions and space. At the end, you will be served a glass of wine in the garden.

A tour of the art exhibitions and Ricard Camarena’s restaurant.

A member of Ricard Camarena’s team will reveal what is behind each dish with a visit to the Ricard Camarena Restaurant. In addition, you will also get to see the Bombas Gens exhibitions on a guided tour.

For further information on the gastro-cultural experience or the festival, write to us at.

Any cookies that may not be particularly necessary for the website to function and is used specifically to collect user personal data via analytics, ads, other embedded contents are termed as non-necessary cookies. It is mandatory to procure user consent prior to running these cookies on your website.